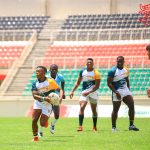 Zimbabwe are the 2022 Barthes Trophy champions following a 19-14 win over favourites Namibia at the Nyayo National Stadium.

The close contest was too close to call but the South African neighbours produced a memorable game that will leave long in the memory of rugby lovers across the continent.

Namibia who beat Kenya in the semis began the match on a bright note, earning an early penalty that was converted by Oela Blaauw for a 3-0 lead.

Zimbabwe responded with their own penalty converted by Brendan Marume to level matters and later on earned a first try of the game to stretch their lead to 8-3. Liberty Sibanda managed to get some space in the Namibia defense and his trickery was enough to hand Zimbabwe their first try of the game

An infringement by Zimbabwe allowed Namibia to score yet another penalty through Geraldo Beukes but Takudzwa Musingwini scored yet another try for Zimbabwe to take a 11-6 halftime lead.

Another penalty kick in the second half by Namibia reduced the arrears to two points with Geraldo Beukes scoring another penalty for Namibia. A brilliant interchange down the left flank released Panashe Zuze who scored Zimbabwe’s second try which proved too vital in the game.

With the scores at 16-14 following Bernd Baddies try for Namibia, the game witnessed a nervy end but a Musingwini penalty for Zimbabwe eased pressure on the Zimbabweans. A late surge by Namibia was well countered by a disciplined defensive play by Zimbabwe and when the final whistle  blew, the boys in white and green jumped in jubilation with light showers savoring the occasion. 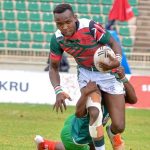 The Kenya national U20 rugby 15s side, Kenya Chipu finished third in the 2022 Barthes Cup after thrashing Madagascar 49-15 in the bronze medal match played under light showers at the Nyayo National stadium, Nairobi.

Having surrendered their title defence in the defeat to Namibia, Chipu came into the Sunday afternoon match focused on the job and got matters underway as soon as the clock ticked for kick off.

Chipu got over the whitewash for the first time in the third minute when John Baraka got clear for the first try of the day. A successful conversion took the scores to 7-0. A second try and conversion extended Kenya’s lead to 14-0. The islanders got their first points of the day via a penalty but that was quickly replied by Tony Oketch’s penalty which extended Chipu’s lead to 17-3 another try and penalty further took matters out of Madagascar’s hands and when David Mwangi landed another try for the homeboys, it was almost game over. Madagascar got their first try of the game just before the breather and when the two sides raced to the dug out, it was 30-10 in favour of Curtis Olago’s Chipu.

Madagascar got matters underway in the second half, earning a try that would see them half the scores to 30-15. A tighter Kenyan defence plus a sleek forward ensured that Kenya won brone and at least a podium finish in this year;s edition. 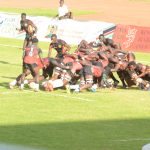 Defending champions Kenya are on course to yet another final after a commanding display against Uganda in the fourth quarter final match played at the Nyayo National stadium.

A resounding 54-20 over their neighbors ensured that Chipu booked a Wednesday afternoon date with Namibia who started the day with yet another huge victory over Ivory Coast.

After a tight first half, Chipu went on a rampage, scoring 43 points in the second half.

At the beginning of the second half, Chipu scored a try for a 16-10 lead with Tony Oketch later on scoring a penalty to extend the lead to 19-10. Another try and conversion saw Kenya U20 extend the lead to 26-10 but Uganda reduced the deficit two minutes later via a penalty.

A sublime piece of play by captain John Baraka released David Mwangi who made no mistake, Tony Oketch was at hand to convert and send the crowd at Nyayo stadium in frenzy.

Another dominant display by the homeboys would see them score another try and conversion but it was another converted try that ensured that Chipu were well into the 50’s.

Chipu have now set eyes on Namibia who had dismantled Ivory Coast 62-0 in the opener. The semi-finals will be played on Wednesday April 13 at the same venue. Namibia will take on hosts Kenya at 2pm before Zimbabwe and Madagascar lock horns at 4:30pm 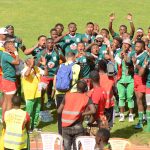 A late Madagascar show ensured that they proceeded to the last four of the 2022 Barthes U20 when they beat Zambia 26-14 to book a date with Zimbabwe in the semis.

The swift Madagascans made their intentions clear in the opening five minutes of the game when they scored from a penalty to take a 3-0 lead. They extended their lead three minutes later via a penalty but Zambia responded soon after when left winger Fred Mutonga raced to touch down for the first try of the game. With a successful conversion, the Zambians gained a point advantage and this gave them a little bit of spark with Mutonga once again showing his skills to score his second try of the day, Mulenga Andersen converting thereafter to take the scores to 6-14 in favour of Zambia. Madagascar sensing danger, picked themselves up and would soon get their first try of the day to take scores at 13-14 during halftime.

The pendulum swung in favour of the islanders in the second half as they raced back to the lead via a brilliantly taken try before stretching the lead to 21-14 via a penalty.

The Zambians had no response to the more agile Madagascar side who raced to a 26-14 full time score.

Madagascar will now meet Zimbabwe in the semi-final on Wednesday April 13, at 4:30pm. Zimbabwe beat Tunisia 19-18 in the midday kick off to book their place in the last four. 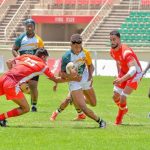 Zimbabwe booked a semi-final slot in the 2022 Barthes U20 Cup after securing a one point victory over Tunisia in the second quarter final match played at the Nyayo National stadium on Saturday afternoon.

The midday clash brought the best out of the two nations with the South Africans settling fast in the hot humid Nairobi weather.

Zimbabwe started brightly and converted an early penalty for a 3-0 lead. Tunisia were then reduced to 14 men when Mohamed Amine Azozi was sent to the bin for a high tackle that allowed Zimbabwe to convert yet another penalty to extend their lead to 6-0.

Fantastic play from the North Africans enabled them to cut the lead when they scored the first try of the game but missed conversion.

Zimbabwe responded well to the Tunisia threat when they got their first try and conversion of the day to take a 11-5 halftime lead.

Tunisia gave a perfect response in the second half when they converted a penalty to reduce the deficit to 11-8 but they could not hold onto the momentum as Zims got a penalty of theirs, converting it for a 14-8 lead.

The game of penalties saw Tunisia get their own, converting it to make the scores 14-11.

A brilliant move by the North Africans saw them get their second try of the day when Mohamed Amine Azozi went through the center poles to score, and Ilyes Ayari then successfully converted to give them a lead for the first time.

They however failed to hold onto the lead and fell in the final hurdle when Zimbabwe scored a last gasp try to end the match 19-18 victors. Zimbabwe will now meet the winner between Madagascar and Zambia in the semis.