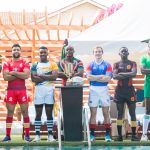 The stage is set for Africa’s premier junior tournament, the Barthes Cup. A contingent of eight teams are in Nairobi and will battle it out across three match days for the continental honors.

Only two teams, Kenya and Madagascar, return to the tournament with Senegal conspicuously missing.

An increase in the number of teams taking part this year means that hosts and defending champions, Kenya U20, have their work cut out if they wish to defend their title for the second time on home soil.

Former Champions Namibia, Zimbabwe, Zambia, Tunisia, Cote d’Ivoire, Madagascar and neighbors Uganda are all confirmed participants of this year’s Barthes Trophy tournament that will take place from 9 April to 17 April at the Nyayo National Stadium.

We take a look at the four match ups that will set the pace on day one of the tournament.

Tunisia vs Zimbabwe
Both these teams make a return to Pool A of Barthes Trophy having spent their fair share of time in Pool B. Tunisia were relegated in 2019 after they lost 28-16 to Senegal in the 3rd place play-off.

One thing is for sure, both sides will be aiming for a strong start. The winner of this duel will meet the winner of quarterfinal 3.

Namibia vs Cote d’Ivoire
2019 losing finalists Namibia make a comeback to the tournament they missed last year due to the adverse effects of the novel Covid-19 in their camp. Cote d’Ivoire are making their first appearance at the tournament. Traditionally big boys in terms of physique, the West Africans will need to bring their A-Game if they are to beat Namibia in the tournament’s very first game.

Madagascar vs Zambia
Last year’s crowd favorite and surprise package Junior Makis of Madagascar will take on Zambia in the third quarter final. They missed out on the title by a whisker last time out and will be hoping to replicate their strong start when they face Zambia on Saturday morning. Zambia will be squaring it out with big boys for the first time and with their neighbors Zimbabwe potentially waiting in the semifinals, writing them off could be a huge mistake.

Kenya vs Uganda
The junior version of the Elgon Cup will be Saturday’s showstopper. Defending champions Kenya kick off their title defense against a plucky Ugandan side who have a sizeable bite in their bark. These two sides last met in the junior competition back in 2014, Kenya winning that one in front of a home crowd at the RFUEA.

A strong start against Uganda will surely be in Head Coach Curtis Olago’s pre-match notes. In July 2021, Kenya managed to hold out Madagascar 21-20 in the title decider. Olago will have the experience of returning Captain John Baraka as well as the talents of Tyson Maina, Samwel Mwaura and Anderson Oduor to count on.

Quarter-Final 1– Namibia vs Cote d’Ivoire (9 AM) 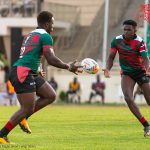 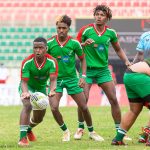 Coach Rakotoarivelo Mboazafy Noé has made two personnel changes and four positional changes to his squad that will face hosts and defending champions Kenya in the final tie of the U20 Barthes Trophy at the Nyayo National Stadium.

The dynamic and electric midfield duo of Razanamparany Fidisoa and Rakotomalala Salotra Lucas remains intact while there is a new half-back partnership of Randrianantenaina Erica Bruno and Ranaivoharison Naina Jean Frederic.

Salotra Lucas already has a brace to his name and is joint-second in the try-scoring list together with Kenyan duo of Tyson Maina and William Opaka.

There are also a number of positional changes as the Junior Makis aim to dethrone Kenya on home soil. Captain Rakotonirina Setra Solofoniaina moves from hooker to tighthead prop, pushing Rakotosalama Bienvenue Angelo to the base of the scrum.

Other positional changes see Randriamanantena Tojosoa Harifetra move from the eighth man slot to openside flank while Rahajanirina Lionel Hadjy moves from the right-wing to the left-wing.

Madagascar will have to win Sunday’s match to be crowned the new U20 Barthes Champions. 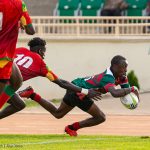 The Kenya U20 squad to take on Madagascar in Sunday’s U20 Barthes Trophy match at the Nyayo National Stadium has been named.

There are five changes in total to the squad that won 50-3 in the opening fixture against Senegal. One change is positional while the other four are personnel changes. Three of those changes are in the forwards while only one affects the backline.

Front row Tom Amoya, lock Edwin Nyachio and back row Tyson Maina all get starting berths while fly-half Owain Ashley comes into the squad as an injury replacement and heads straight into the starting line up.

This means that the forward trio of Mohamed Khaidar, Andrew Wangila, and Collins Indeche is joined by Arnold Onzere on the bench while Nicholas Okullo is out of the matchday squad completely.

The only positional change sees Reinhardt Mwalati move from the blind side of the scrum to the open side to accommodate flanker Tyson Maina. Owain Ashley replaces Amon Wamalwa who is out on medical grounds.

Vice-Captain Matoka Matoka leads the point-scoring charts after two matchdays with 15 points from 1 try, 2 penalties and 2 conversions. Matoka will be joined by William Opaka and Anderson Oduor in the back three.

Kenya has to beat Madagascar to defend the title they won back in 2019.