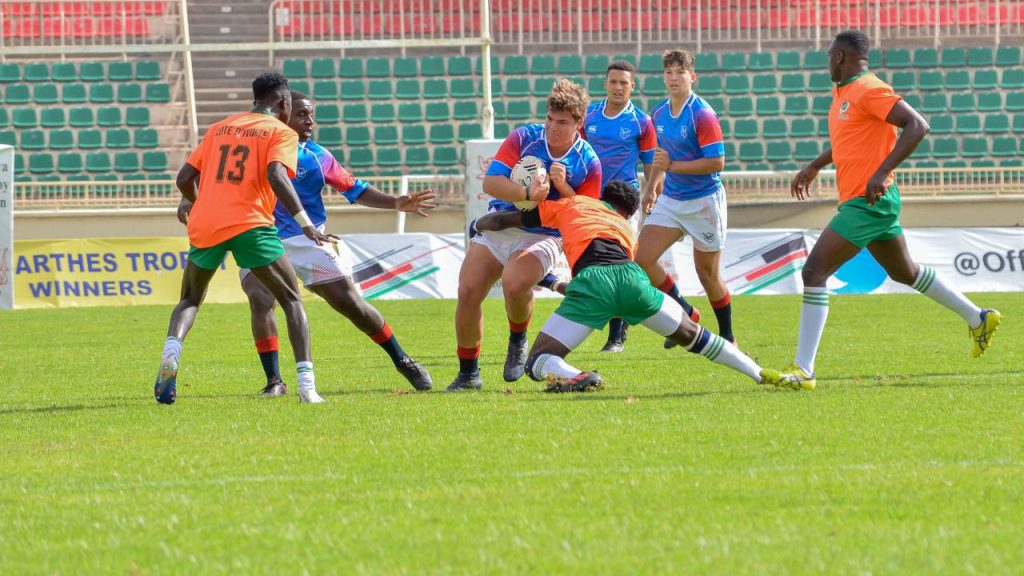 2019 losing finalists Namibia got their hunt for the 2022 U20 Barthes Trophy off to the very best of starts as they thrashed Ivory Coast 62-0 in the opening game of the knockout tournament to successfully book their place in the semifinals of the continental competition.

In the first quarter final fixture that was played on Saturday morning at the Nyayo National Stadium in Nairobi, the Namibians were in a class of their own with their ten tries as they breezed past the West Africans who failed to get any response whatsoever in the match.

Just ten minutes in, Feliciano Shakira and Patrick Frits had already landed two tries that were both successfully converted by Gerald Stephan to put Namibia 14-0 up, a tell tale sign of what awaited the opponents.

Unable to offer anything as counter response, the Ivorians found themselves conceding three more unconverted tries as they went into the half time break trailing 29-0.

Of the three added, Stephan landed a first half brace on either side of Jano Atto’s touch down to ensure the comfortable lead at the interval.

In the second half, Ivory Coast improved a little bit but even with the tryline just at their mercy, the team could not find any way past a mean and resolute defense that kept them out whenever they probed.

Namibia on the other hand added five more tries that were all successfully converted save for one to complete the 62-0 rout that ensured their ticket to the semifinals.

Stephan bagged his hat trick in that half as Shakira completed his brace with Niel Holtzahauzen, Franko Dylan and Jurgen Beddies also getting on the scoresheet in the convincing win.

Namibia will now face the winner of the Kenya versus Uganda clash in the semis.