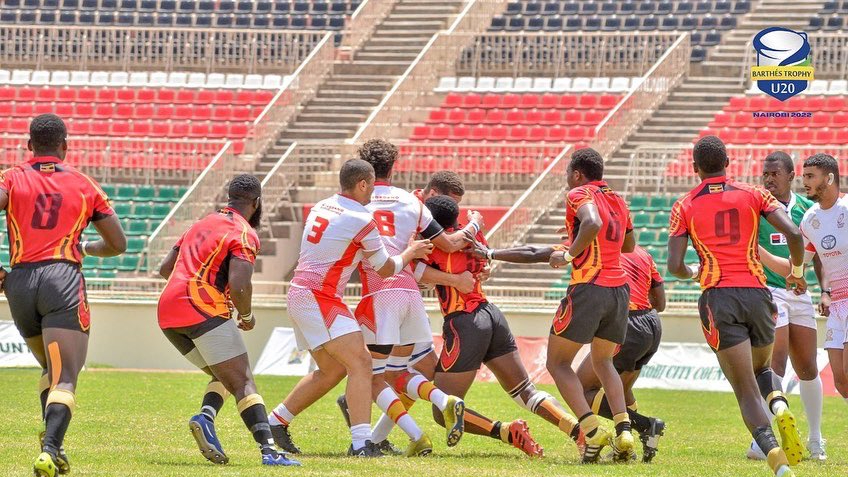 The Tunisia U20 national rugby 15s side finished the 2022 edition of the continental U20 Barthes Trophy in fifth place after defeating Uganda 24-11 in the 5/6th place final staged at the Nyayo National Stadium on Sunday 17 April.

In a low scoring affair in the first half, the Tunisians took a 7-3 lead going into the break after Mohammed Riahi’s opening try was successfully converted by Ilyes Ayari.

Uganda, who dominated a better part of the game, were let down by poor handling skills in the red zone as they camped around the Tunisia 22 but had nothing to show for it on the scoreboard.

Skipper Daniel Okello finally put them on the board before the break with a penalty goal.

Okello would make it a one point game at the start of the second half as he drilled in a second penalty to make it 7-6 but the Tunisians pulled clear by scoring three consecutive tries to take their scores to 24-6 but Kevin Ampaire managed to score Uganda’s only try that got the game to a respectable 24-11 fulltime score, leaving Uganda to settle for 6th place behind Tunisia.

In the 7/8th playoff, Zambia got their first win of the tournament as they defeated Cote D’Ivoire 22-8 to finish in 7th position ahead of their opponents who finished bottom of the pile in this year’s tourney.

Both teams came into their final clash without a victory in the tournament after Cote d’Ivoire lost to Namibia and Uganda while Zambia lost against Madagascar and Tunisia with both sides looking for positives to bring their campaigns to an end.

Zambia ended up plundering their maiden win as they came from behind to stage the victory over the Ivorians who finished without a win in their three matches.