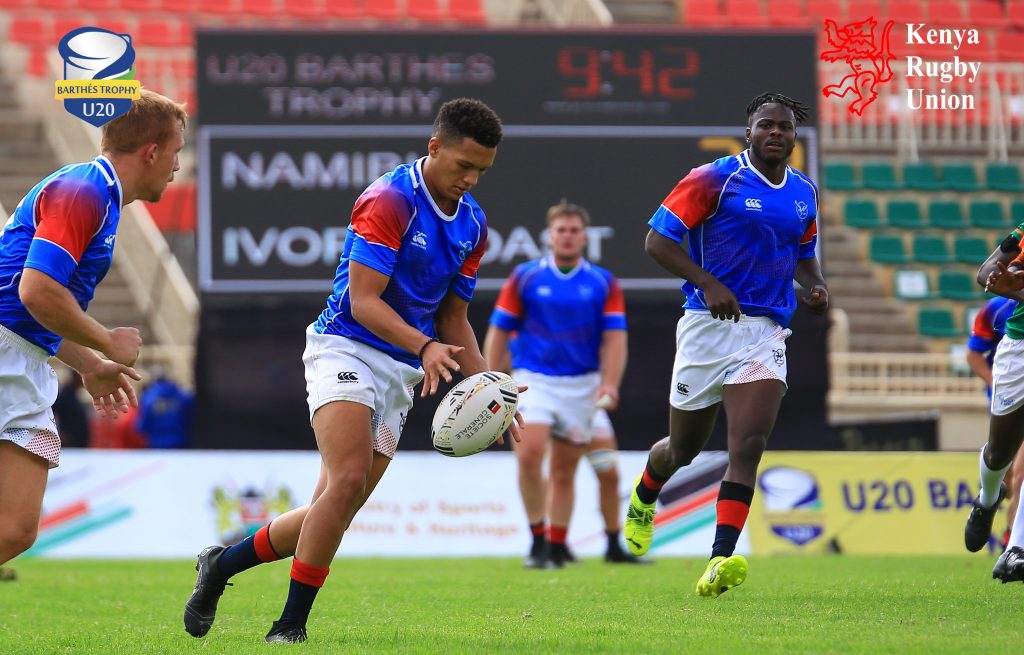 Namibia ended Kenya’s reign as defending champions with a 16-5 victory in the Rugby Africa U20 Barthes Trophy tournament at the Nyayo National Stadium on Wednesday 13 April 2022.

The Namibians took a 6-0 lead into the interval courtesy of two penalties from skipper Oela Blaauw in a half that saw Chipu waste several opportunities to get points on the board, Tonny Oketch missing three kickable penalties. The Kenyan forwards, despite their dominance, were also not efficient in the final third, twice fumbling on the Namibian try line, a script that would be followed throughout the game.

Blaauw then converted Niel Holtzhausen’s try to put Namibia 16-0 up after the break.

Kenya’s incessant pressure failed to bear fruit, this despite having Namibia on the back foot for the better part of the second half, spurred on by the inclusion of second half replacements George Otieno, Anderson Oduor, John Aswani and Joseph Ayiro.

Ayiro would score a late try, played in by David Mwangi but his efforts proved to be too little, too late as their reign as champions came to an end.

Namibia will face Zimbabwe in Sunday’s final. Zimbabwe made it to the final with a 32-3 victory over Madagascar.

Elson Gabriel put the Malagasy ahead with an early penalty before Zimbabwe responded with Brendan Marume’s 12 point haul coming off 4 penalties, Tanaka Gondomukandapi’s brace of tries complimented by tries from captain Takudzwa Musingwini and Tamuka Kambani.